INXS concerts and a sore throat....

Saturday morning came (11:30 AM) and everyone in great spirits...spirits left over from last nite....Ajit coming down from Trivandrum, Anwin already here from Vellore for some “test” he said, and the rest of the bangalore gang....hmm, thats me and Anoop.

After a little bit of a scuffle over the remaining OH (alcohol) of yesterday, we decided to head out for an early matinee and landed up in a place called “Shivas”. We asked for Mr. Peter Scott, who was our hero the last time we went to a concert. I never have posted about that time....But an offspring of Seagrams was the next best thing that they had. Wonder where it came from though, didnt taste like any good whisky! 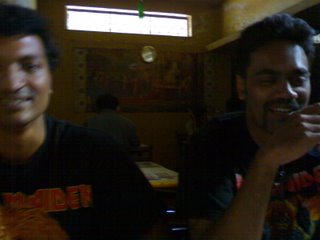 After a couple of good conversations with the son of Mr. Seagram, Renie texts Anoop from Chennai saying that the concert was cancelled!! A very good attempt to frighten him and it worked really well!! Anoop gets all worried and even asks me to go and check on the internet. Well, I take over and make plans with Renie about taking a drive to Vellore. Renie, "allegedly" has not fallen for it, but carries the joke along and we finally decide that enufz enuf. I had to calm Anoop down though, he was visibily a bit rattled and wanted to check and be for sure... until Renie gave up and called his bluff.

We are sitting in the bar and me, Anoop and Anwin are wearing Iron Maiden T-shirts. Abhilash is wearing a T-shirt with an up yours symbol on it. So Abhi suddenly looks around and says..wow, three Iron Maidens and one....oops Fuck!!

At about 4 we decided we had enough of a chat with that son of a seagram and headed off to Styx..we dont know how we got there but we did. HoneyKing was there and Ajith had slyly slithered off to one of his “appointments”. Anoop hassled the DJ (Venky) so bad that he was playing all the songs we wanted to hear and none that he wanted to play.

Ajith returns bloody eyed..he still says it was from the Bloody Mary..but we have our doubts! he he. 6:00 PM and time to leave..we had to catch the front row so we could create some havoc! I dont remember Anoop driving..I think Thenraj did..

We hit the concert area and met Spike..Houdini Anwin manages to smuggle one son of seagram inside while Abhilash fails...more concerts are in order for you my friend....you learn a new thing at every one of em.... 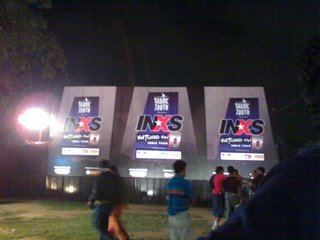 Finally inside the ARENA!! Anoop gives us this crazy idea of giving Ajit some kicks and we try to haul Ajit. Ajit felt bad and wanted to be alone for a few moments, with Thenraj constantly reminding us not to have done that!!. Thanks machan, you dropped my high by a few points there. We finally decided to go to the front of the stage and Anwin was leading the way and promised to take us to the front, but third row was all we could reach.

The band comes on stage!!!!!! JD walks up and they start with Suicide Blonde!!! It was electric! Man, especially when you are that high and close to a stage, I guess anything sounds good....more on that later. Anoop, me, Anwin and Abhilash in one group and Ajith, Thenraj and Spike missing. Wonder if Ajit was still feeling bad about it all. "Never tear us apart" was next and was simply fantastic!!! The bass was just echoing through the air... 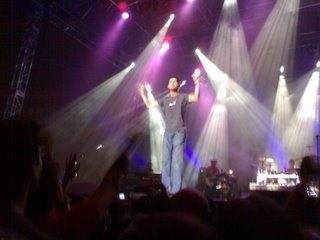 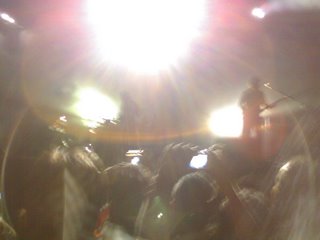 Especially since this was Abhi's first concert up so close, he was having a gala time, headbanging, banging some heads and jumping up and down. We were going haywire in there and all the guys (a dad included) thought we were mad and all the girls thought we were just plain obscene and being fucking pervs..Hey what the FUCK did they expect in a rock concert?....a fucking ballet dance?? A few disgusting looks and we were still jumping, arms failing about like butchers making pork chops. Myself and Anoop were banging the same old dude, but I think Anoop enjoyed it more..he he he 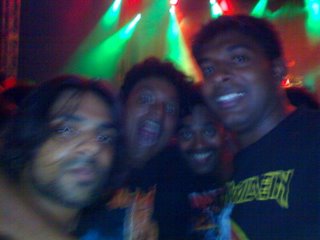 End of concert..so we thought!!..But they came back for an encore..indian brains at work there...its happened for every fucking concert so far!!! Played 4 more songs and we were good to go home.. 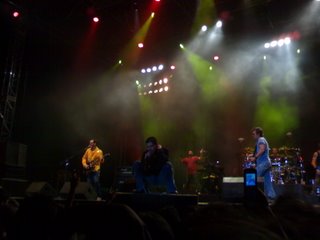 Had food at Fanoos and empty wallets later we went home and crashed..with Abhilash sitting in front of the computer on the sly again..

Woke up next day to find out that my neck was still stuck on to my body though it wanted to run away..

Read a shocking truth in the morning paper..apparantly JD had a sore throat and wasnt singing too loud or sometimes, at all...thats what I tell you people, you either go to a good rock concert or you gotta know how to drink before one!!

Abhilash has just given me the snaps..and I think there were some good ones...they are all scattered in this post...if you cant see em, you can contact Abhi at abhi@abhi.com

To see Anoop's side of the story, click here.... no permission was given to copy, but poetic license reigns!!
Conjured up by Naveen Roy at 8:46 AM