Argentina's World Cup dreams.....are just that. Dreams...... They just lost to Germany on penalty shoot-outs.
Damn!!! Couldn't take it!!! Was watching the match in office via streaming video and watched the penalty shootout with guys in office in the big screen. Man, could have won the match. And the referee seemed to be a moron!!! I am sure he will be called up by the media for his poor showing.
Conjured up by Naveen Roy at 11:21 PM 4 comments: Links to this post


Conjured up by Naveen Roy at 8:00 PM 2 comments: Links to this post 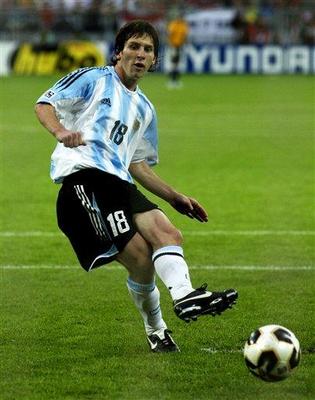 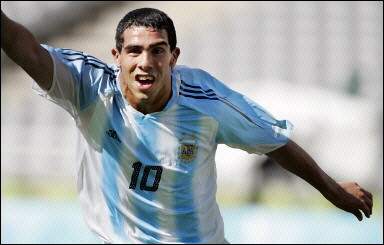 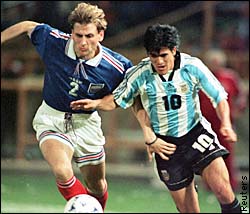 GOOOOOOO ARGENTINAAAAAAAAAAAAA!!!!!!!!!!!!!
Conjured up by Naveen Roy at 1:35 PM No comments: Links to this post

Dictionary:
mi·rage (mĭ-räzh') pronunciation
noun.
1. An optical phenomenon that creates the illusion of water, often with inverted reflections of distant objects, and results from distortion of light by alternate layers of hot and cool air. Also called fata morgana.
2. Something illusory or insubstantial.
[French, from mirer, to look at, from Latin mīrārī, to wonder at, from mīrus, wonderful.]

Spelling Bee:
An optical phenomenon that creates the illusion of water, often with inverted reflections of distant objects, and results from distortion of light by alternate layers of hot and cool air.

WordNet:
The noun mirage has 2 meanings:
Meaning #1: an optical illusion in which atmospheric refraction by a layer of hot air distorts or inverts reflections of distant objects
Meaning #2: something illusory and unattainable

Naveen Roy:
noun, pronounciation tip - sounds like sa-la-reee hyk (thats salary hike if you know english).
An illusion that was at the horizon, beckoning to your parched soul and mind. A salary hike that will never happen to you alone, though at recent times, personal experience has shown that it does not happen for other people also. Can be rectified by switching jobs, shamelessly!
Conjured up by Naveen Roy at 1:54 PM 7 comments: Links to this post

Yooooooooohoooooooo!!!!!!!!! Argentina THRASH Serbia-Montenegro 6 to NOTHING!!! Man, thats a match that I wish I could have watched at home. Well, its ok, damn glad about this scoreline!!.
Conjured up by Naveen Roy at 8:59 PM 1 comment: Links to this post

Well, the World Cup has begun and 8 matches are over already. There have been some good matches and some lacklustre ones. Some of the big guns may have won, but not very convincingly. When leaving office on Friday night, we were in for a big surprise. Anoop had gone out and bought a small fridge to store some beer in - all for the World Cup. When I went home, there was some cool beer and some great matches waiting. Good one dude!! Following are some of my thoughts on the matches so far...

Germany 4 Costa Rica 2 : Didnt get to actually watch the whole match cause I was stuck in office. But the remainder of the match was pretty good. I still think Germany could have shut out Costa Rica more effectively.

Poland 0 Ecuador 2 : Pretty good match, considering that many people thought that Poland would win quite easily. Well, we have kind of an upset on that match!!

England 1 Paraguay 0 : One of the lamest matches so far. I fail to see why the BBC raves so much about this team, or maybe it was one of the teams bad day out. I mean, the only goal came off the Paraguay captain, an own goal and the match was pretty boring with no great fun.

Trinidad and Tobago 0 Sweden 0 : Hehe, another upset I am sure. What a match with T & T playing really well!!

Argentina 2 Ivory Coast 1 : A pretty good match but I should say that Argentina did not really play well. I mean, the 2 goals were good, but they should have kept their defence a little more tighter!!. Riquelme impressed with the mid-field. Seems like he will be the playmaker - or maybe Sorin.

Serbia and Montenegro 0 Holland 1 : Robben certainly impressed in this match. He took a little time to get out and really start playing, but he really impressed especially in the second half. I wish Netherlands really had poured in more goals!

Mexico 3 Iran 1: One of the most equally matched teams I should say. Or so it seemed until Mexico put their foot on the gas during the closing stages of the game. Bravo impressed and the Mexican goalkeeper, Sanchez did a great job. Also impressive was Marquez, once Borgettin came off after an injury.

Angola 0 Portugal 1 : Well, again a pretty good effort by Angola. If they had converted some of their better chances, Portugal would have surely lost. Ronaldo as usual, has to control his emotions.

Well, these are the matches so far. Hope to watch some better ones soon. And Anoop's favourite, Italy is playing today. No brainer that.
Conjured up by Naveen Roy at 2:51 PM 6 comments: Links to this post

Damn!, hours to go for the BIGGEST (yeah not even your damned cricket comes close!!) sporting spectacle of the planet to begin and there is no sign of it anywhere here in Bangalore!!! Oh! you that-boring-pseudo-game-called-cricket lovers of India, where are the times when football ruled?? Where is all the excitment and the colours, the discussions and arguments on which is the best team?? Damn, I feel bad for all you jokers who cannot watch the World Cup. I called up my dad and he is in the darkest of moods cause in Tamilnadu, there are not many places where you can get ESPN Star Sports on cable. Damn, wish for him that DD could have telecast the matches live. Think DD also has plans only for cricket!!. Can't watch the matches in office either. There is a TV, but no cable!! But might get that arranged!!. (YES!! - update on that - the TV is working and even better, thanks to an ex-manager, they have arranged for the projector and a large screen!!! GREAT!!!!)

I think there are only 2 countries on the whole damned planet where they will not be tuning into the World Cup - India and the friggin' US of A!!!!!!!!! (Update on that too - hmm, the fever is spreading, slowly but surely!!)
Conjured up by Naveen Roy at 2:33 PM 4 comments: Links to this post

Well, the World Cup begins tomorrow and there is no excitement at all!. There is no one talking about football at all, the media is not discussing the teams and nothings ever happening. India is becoming one country totally and stupidly involved in this stupid game called cricket. Hate it!.

To top it all, there is no television in the office and even if there is one, we have to walk to a different floor to watch it and moreover or more importantly, there is no cable connection. Hope this can be resolved before the World Cup commences!!

Damn, I have to have my fix of the World Cup matches!!
Conjured up by Naveen Roy at 7:41 PM 1 comment: Links to this post

Well, I conveniently forgot to mention this on my blog before, but here I am. My bike got into an accident again!. This time Karthik of the Bliss fame crashed and fell and nearly broke his arm. Thank the unbelievable god that he didnt suffer a fracture, but only a blood clot in the right arm and a few stitches in the chin. He's much better now and my bike is finally out from it's hospital. We suffer some cost, but I am glad that I will be finally getting back my bike. I miss my gal!!. Hope that I can really get to do some long distance riding soon!!

On a happier note, well, nothing. Does anything happy ever happen??
Conjured up by Naveen Roy at 8:56 PM 5 comments: Links to this post

Well, today has to be the best day for a whole damn year!!!

But still, love the number associated with this - the Devils number....rock on
Conjured up by Naveen Roy at 2:46 PM 4 comments: Links to this post

Well, the last post has ended on a good note as Anwin has said....but somehow, I think it is not over...theres more to come......time will tell....

On a happier note, I am really glad that there are just 7 days left for the World Cup to begin. I am rooting for my favourite team - Argentina. They are pitted against Ivory Coast, Serbia and Montenegro and the Netherlands. Seems like Netherlands and Argentina will make it through. Am also rooting for Brazil and Germany - in that order. Really wish that we had a large screen ( and by that I mean, in excess of 30" ) back home, or atleast in the office so that we can watch the matches live. Well, can dream can't I?

And even better, had a great time during the past weekend in Pudupatti, a village in Tamilnadu where me and Anwin went to attend Arun's wedding. The place is also close to Thekkady, quite famous for its elephants. Though we could see none, we had a great time and I have some great photos to prove it. Click on the link to view em in Flickr. Here!!


Nothing more...will meet u all in the next week....
Conjured up by Naveen Roy at 8:45 PM 2 comments: Links to this post