I miss those days when I used to watch MTV nearly all day! I know, unbelievable! Headbangers Ball was awesome and there used to be so much of Rock on MTV. Believe me, it was not the sloppy shit it is now! So what have MTV gone and done? Put up most of their old videos on the net on www.mtvmusic.com.....its awesome and you will have a great time going through some old videos that you loved so much....

Came across these hard hitting quotes by Mark Twain from Listverse....

1. Always acknowledge a fault. This will throw those in authority off their guard and give you an opportunity to commit more.

3. Be careful about reading health books. You may die of a misprint.

4. Clothes make the man. Naked people have little or no influence on society.

6. Don’t part with your illusions. When they are gone you may still exist, but you have ceased to live.

7. Facts are stubborn things, but statistics are more pliable.

8. Honesty is the best policy - when there is money in it.

9. I didn’t attend the funeral, but I sent a nice letter saying that I approved of it.

10. I have a higher and grander standard of principle than George Washington. He could not lie; I can, but I won’t.

11. I have been through some terrible things in my life, some of which actually happened.

12. I thoroughly disapprove of duels. If a man should challenge me, I would take him kindly and forgivingly by the hand and lead him to a quiet place and kill him.

13. In Paris they simply stared when I spoke to them in French; I never did succeed in making those idiots understand their language.

14. It could probably be shown by facts and figures that there is no distinctly American criminal class except Congress.

15. It is better to keep your mouth closed and let people think you are a fool than to open it and remove all doubt.

16. Let us be thankful for the fools. But for them the rest of us could not succeed.

17. Never put off until tomorrow what you can do the day after tomorrow.

18. Often it does seem a pity that Noah and his party did not miss the boat.

20. We have a criminal jury system which is superior to any in the world; and its efficiency is only marred by the difficulty of finding twelve men every day who don’t know anything and can’t read.

My favourite one is "It is better to keep your mouth closed and let people think you are a fool than to open it and remove all doubt". Oh! How I wish so many assholes I have met in life read this! But like Mark Twain has said - "Let us be thankful for the fools. But for them the rest of us could not succeed."
Conjured up by Naveen Roy at 2:15 AM 2 comments:

Email ThisBlogThis!Share to TwitterShare to FacebookShare to Pinterest
Labels: Life

Haha and to think that they go to the pain of including another famous lip syncher of our times...
Conjured up by Naveen Roy at 9:34 PM 1 comment: 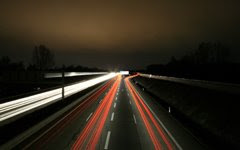 It will be a disrespect to the photographer to view this image in such a small size...to view in large size, view in InterfaceLIFT......
Conjured up by Naveen Roy at 1:05 AM 1 comment:

Def Leppard have cancelled the tour that was planned to India... 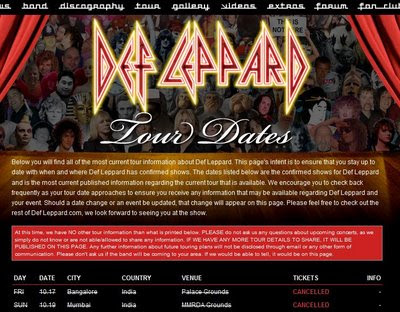 Conjured up by Naveen Roy at 11:59 AM No comments:

What with my official trip to the Philippines being postponed for at least 2 weeks due to market conditions, I decided to go ahead for the 7th Anniversary celebrations of the Rolling Thunder Motorcycle Club. This year it was held in Yercaud.

Me and the wife decided to start off early morning with the 7 o'clock batch. Turned up before time and as usual, no one was there! Then Sandeep joined us and slowly, one by one people turned up. By the time it was a sizable number, we decided to ride off. By this time, it was already 8 AM. No worries, rode a fast one and had breakfast in Hosur. Then continued on a very scenic route without touching Salem. I have never been on this route and it was awesome to say the least. Due to a large number of stops, we actually reached close to 2 in the afternoon.

Organisation was great and we got our rooms in no time at all. Before settling down, we had a spot of lunch and a couple of beers along with it. That was enough to put us off to sleep and sleep we did!

Night fell and there were quite a number of bikes already. Dinner and some sly drinking (pre-mix) had me in the mood for some really good sleep.

The itinerary for the next day was some insane stuff like Lemon and Spoon and slow bike racing! Took part in the Lemon and Spoon and came in 3rd. Not good enough and had to sit in the sidelines after that. The games continued and I suddenly found out I was short of cash in hand. And Yercaud has no ATMs!! Thought it would be a great time to take a ride and me and wife took off on a ride to Salem.

That was actually a very nice ride. Scenic and very relaxing. Also, good visibility in the hills and made it downhill in no time at all. Fueled up and took money at an ATM in Salem and made it back up again.

So took off with some plans in mind and made it to some perfumery that sold us some really potent locally made medicines. All natural and awesome. Moving on, we went to the Servarayan temple, which is the highest point in Yercaud. Lovely view from there - you can check out a panned image here. Next stop - Bear cave at some local businessman's estate. That was quite a trippy ride inside the jungle on a stony, muddy path. Damn beautiful place and also the cave was scary but fun. Had to crawl on all fours sometimes and locals tell us that this cave actually ends at the temple!

Next stop - Lady's seat which is akin to Suicide point in Kodaikanal. The view from here was incredible! You can see all of Salem from this point and even see the winding ghat roads leading up to Yercaud. We stayed there for some time and waited to take some great pics of the night lights of Salem.

Then rode back to the hotel where a party was awaiting us. Rider Mania 09 was kicked off and some of the prizes were up for grabs. Then started the partying which was to say the least - mindblowing!!! Met some awesome people like Katz and the others from Madras Bulls. Made some new friends and blown, went off to sleep...

Next morning, we were supposed to ride at 8 in the morning. But we finally started off at 9:30 and this time again, it was the six of us riding together. And to say the least - I enjoyed this ride most and loved the company of these great guys!. Beautiful roads and great company - what more does a biker need?

remember the Mahatma today cause all the booze shops are closed. What depths have they brought you down to!
Conjured up by Naveen Roy at 10:41 PM No comments:

Why I Hate proprietary software

Ok this post is not about why I like the Open Source Movement. Its the views of Eric Raymond, author of the awesome book, The Cathedral and the Bazaar. Its an interesting point of view. Not the usual geeky, kiddish ideas that say "I don't like Microsoft because of this blah blah blah". More militant in his views (as usual), Eric says how he felt like a slave when working with proprietary software and some people who have coded for a long time never realise that they are after all, slaves to the system!

"The stupid and the timeservers were lucky. It was the really bright, creative people among my peers that hurt the most. And we were all very young and malleable and eager to please; it took me years after I’d escaped to understand that I had a right to feel angry about how I had been used, and many of my peers never figured that out at all."

Interesting ideas and thoughts and if you are a coder, open your eyes and read the whole post here....
Conjured up by Naveen Roy at 11:49 AM No comments:

Well, Duke Nukem himself must have got old and bored and gone off chasing women on his own. But 3DRealms have announced some screenshots of the new Duke Nukem Forever game....

From Rock, Paper, Shotgun.
Conjured up by Naveen Roy at 12:36 AM No comments: