Ok, got a chance to recently review the Samsung Star as it is popularly called. I had used it for a number of days and am reviewing it here. This is going to be a very candid review and I am not going to lean one way or the other. It is purely all my views and I will stand by them. I will naturally be comparing some of the features of this mobile to other mobiles that I have used and if shortcomings or good points, will surely be pointing them out!

To start off - a good, cheap offering for someone wanting to experience a "touch" interface. First opinion was that it is pretty slick, thin, not too heavy with a nice, large display. But in the beginning itself, the touch interface was a little draggy and would suddenly take me to menus that I did not actually click. But I put this down all to me not having used a touch phone before.

But on the second day itself on using this phone, I missed the cab to office due to a peculiar problem - the network would suddenly disappear from the mobile. I checked this again - as soon as I would pick the call, the network would drop (the no of lines reduce) and then drop off and never come back! The worst part of this problem - I would have to restart the mobile to get onto the network again. I quickly called the Samsung service center and did not expect any help. Well, my expectations were shattered - they were TOTALLY UNHELPFUL!!!

As we can expect from most manufacturers today, they were only interested in selling the product and least bothered about the after-sales-service (ASS)!! The guy at the helpdesk just said that I would need to take it to the service center. This with a mobile that was just days old!! I am certain that Samsung are aware of the problems on this mobile but are keeping mum and are not even ready to advise their complaint cell to tell the user that they are aware of the problems!!

And another problem - the Google Maps application (that comes pre-installed on the mobile) wouldn't work! As in, it would not update my current location. Called the complaint cell and again - the same dialogue - please take it to a service center. (We are least bothered about you, since you have already bought the mobile. I couldn't tell them that no, I have not....)

Well, put my SIM into my old Sony Ericsson K550i again (since the network drops was becoming too much!) and went to the service center on a Friday. Jam packed. And I saw atleast 3 other people with the same mobile - same problems. And this is the service center in BTM layout. I tried waiting for a while but the line did not seem to move at all! I finally left in disgust. My token number was 40 and the 19th person had just had his mobile looked at.

Again I went on Saturday and waited for 3 hours to have someone even look at my mobile! I was thoroughly pissed off by this time and thought lets just throw the damned thing away!. Better sense prevailed and I stayed on. But the service person said that they are aware of the network problem and the Google Maps problem and that they would just update the firmware and it should be fine. Or if not, then I would have to leave the phone with them for 10 days! Anyways, they updated the firmware and gave it back to me - Google Maps again did not work but atleast the network problem did not crop up again.

I then bought a memory card for the phone - a microSD card - 8Gigs. It is such a freaking pain to have to put off the mobile, remove the battery, stand up-side down and then fit the memory card in. What were you guys thinking? In this day when all memory cards are plug-n-play, why so much nonsense?

And then, I put in some songs with the really wierd PC-software that needs to be installed to use the memory card. I then plugged in the headphones. Tried to put the phone into my pants pocked with the headphone attached - and you will understand why I wasn't able to - They have stupidly designed the headphone socked on this phone: 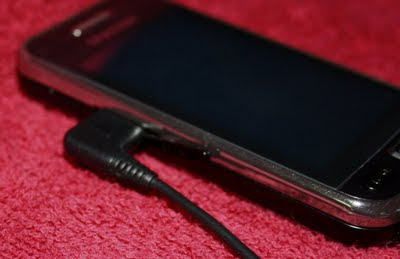 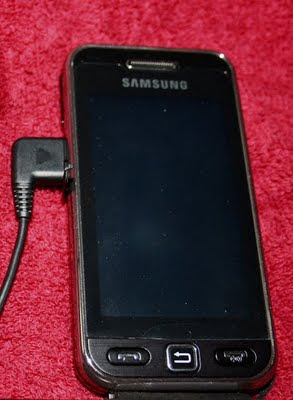 Or you will need to put the phone up-side down in your pockets - STUPID!

Ok, calmed down a bit and "touched" the music player on the phone. A really ugly interface came up and I was put off a bit. Well, the music is in the listening. So cranked up the volume and started on some easy listening like Leonard Cohen. But the headphones are crappy! The left side one does not even fit properly in my ear. But the right one is perfect. Damn, did you guys give the left and right side to two different chinese factories? Taped the left earphone to my ear and listened to some Iron Maiden. Bruce Dickinson sounded like he had a sore throat and Nicko McBrain was drumming some Van Halen drums - they sounded so trebly. The bass has no thump to it at all! This is one of the biggest mistakes Samsung has made. The headphones must have been good and the music player interface good. And worse, you don't even have an option to custom set the equalizer. Ended up listening in "Pop" settings since the rest are plain crappy for the music I listen to!

Moving on, slowly - take a look at the stylus that is suppied with the phone! 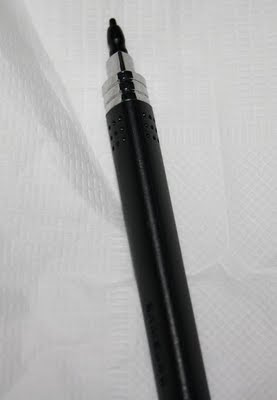 Did that remind you of a certain pencil that women used some years back - yup, the Kajal pencil! Damn, I am sure that this was a cost-cutting measure in Samsung. One of the heads of the project must have called up one of the new engineers and said - "Quickly design a cheap stylus for me. We totally forgot that touch phones need a stylus too". And here is how it attaches to the phone! Hilarious is not the word. STUPID is the word you are looking for! 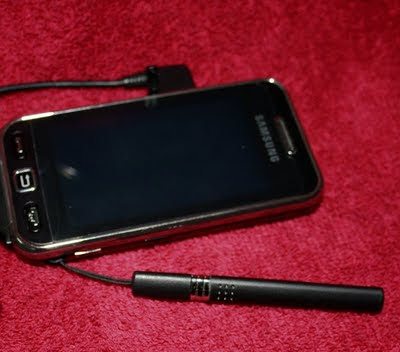 Moving on, here are some of the other problems that I noticed. Some of them were also noticed a friend in office - thanks Rubert!

1. You "cut" the call and it takes some time. Sometimes the other party has even hung up but the timer keeps running and continously pressing the "cut" button also does not end the call!
2. This is surely a design flaw - the ringtone starts making noise only after a second once you receive a call - this is quite bad for guys like us who get calls from our cab drivers. They give one ring and the damned phone does not even ring!
3. This is really, really, really ANNOYING - I am not able to send a contact as a message. Say my friend asks me for another friends number. In my Sony Ericsson phone, I could go to my contacts list, select the number and send it as a message to other party. This is not possible on this phone! When I try sending, it says that the network settings are incorrect. I believe it is trying to send it as an MMS. WTH for? Send it as a normal message, please!
4. This is potentially dangerous - you receive a message on this phone, please check the time at once. You will see that the time is showing as 15 minutes earlier!
5. Network problems are recurring again - the network bars show full but I am still unable to receive a call. Another day, missed the cab!
6. This is peculiar to only my friends mobile - when dialling out, the phone shows "Diverting call" but call divert has not even been activated on the phone.

Some things I really miss -
1. Why is there no way I can switch between applications. Say I am listening to music and then start using the browser, why cannot I even go back to the player without putting off the browser? Even my el-cheapo Sony Ericsson had this option!
2. Someone tell me how to close the browser? I know, use the power key! But isn't there a smoother way?
3. Why no themes?
4. Why the STUPID idea that I can only use an image as a wallpaper if it is installed on the phone? I download some images on the phone with WAP and have to move the images to the phone from the memory card to be able to use them as a wallpaper!
5. Why so large fonts and NO OPTION to change the size?
6. When I set the alarm, why does the damned thing have to start "alarming" when I change the volume for the alarm? To keep me on my toes in the middle of the night?
7. Same problem like the wallpaper - when I select a music file as a ringtone, why does the file have to be copied to the phone memory to be able to set as a ringtone? STUPID!!
8. When I re-sample a video file (with the correct resolution for the phone), why does the damned software again take ages to re-sample the file? And even worse, even if I transfer a re-coded file to the memory card and try to play it, it gives me errors!
9. Samsung say the screen auto-rotates. BS!
10. The widgets - for Facebook, Flickr etc are just icons that take you to the respective pages on the browser. Someone tell Samsung that there are thingies called Bookmarks that we humans use!
11. I miss the option of finding the song name for songs played on the FM radio!
12. The RSS reader DOES NOT WORK.

To end it all, I would say the things I miss the most are the nice earphones from my earlier phone, nice sound quality, equalizers, ability to switch between applications. I really hope someone from Samsung reads this review and quickly does something about the STUPID design flaws and though the hardware cannot be changed, atleast releast a good firmware that would remove some or all the shortcomings. And they will need it soon - cause people are reading this review!

And an update - Google Maps is working! The guy at the service center said that they have put across a lot of feedback to Samsung about this phone and are expecting the problems to be ironed out. I really hope so! I wouldn't want to plonk down 9000 hard-earned bucks for a mobile that does not give a bang for its buck(!!)

And Samsung, please introduce an option where the software is auto-updated on the phone - saves people the trouble of waiting for 3 hours in a useless service center.
Conjured up by Naveen Roy at 10:37 AM