Well, well well....we are just back from Rider Mania 2009 and to say the least - its fucking horrible to be back in reality and I really miss the open roads and the biking fun!

Rider Mania 2009 this time was hosted by our club - the Rolling Thunder Motorcycle Club - RTMC for short. It was hosted in Ooty on the 24th and 25th of January.

The plan was for 8 of us to ride out as a group on the 24th morning. With me having broken my arm in November, I could not ride and had to ask Balls and Bluetooth to take me and the wife as pillion riders. Plans set, me and Jackie reached the Shell petrol bunk at Mysore road at 4:30 AM. 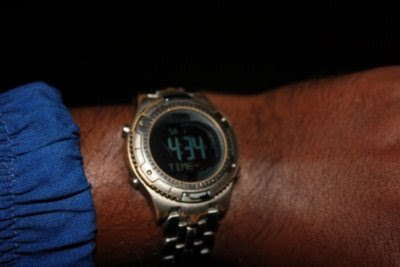 Bluetooth was the next to arrive and soon thereafter, Inyub and Balls arrived. Zeshan arrived and some other guys who thought we were a different gang ended up waiting with us. Sunje (dude, sorry if the spelling is not right) came next and Ady soon after and we were ready to start off with only Sai missing. All the guys were getting a little restless and Sai finally arrived. Started off at around 5:30 (not sure) and made straight to the CCD on Mysore Road. It was fucking freezing cold and I can only sympathise with Bluetooth who was riding. Froze our nuts off!! 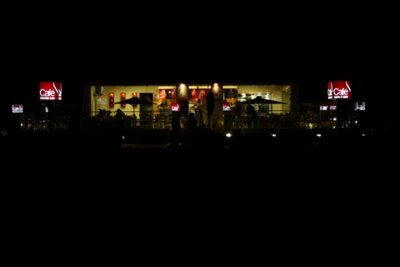 Got a good pic of CCD with the dawn just around the corner.

Recovered with some piping hot cups of coffee and started off back again. Soon after, Bluetooth's bike had a problem and the rest of our group had zoomed off. 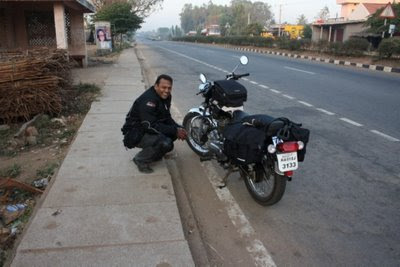 Bluetooth doesn't look too sad in that pic, but we were disappointed thinking that we might have to tow the bike back to Bangalore and take my bike for the ride. Thinking of all that time wasted pissed us off. Made a whole lotta calls to lotsa guys trying to get a solution but finally problem was solved by an RE mechanic and it worked. By this time, Balls had come back with a mechanic from Mandya. Checking with Jackie, she told us that Sai was the point for their group now and was zooming off and was not intent on stopping! :)

We started off and made some good time but we were never going to catch Sai. Did some hard riding and reached Mysore and had a decent lunch. Heard that the others were at Gundlupet and were moving off. Intent on reaching Ooty soon, we started off back again and reached the Bandipur Game Reserve. Awesome place and it was great to see some elephants on the road as soon as we entered. Went through the Reserve looking out for some wild animals and all we did see were some spotted deer and tame (!) monkeys.

That stretch was really good and some of the InddieThumpers overtook us. They were riding all the way from Mumbai. Started on the ghat road section and made some nice twists with 36 hair-pin bends!. Sai and party were waiting for us and we made our way to Sterling Resorts where we registered and got our rooms. Damn, what a view of all the bikes. Fucking awesome. 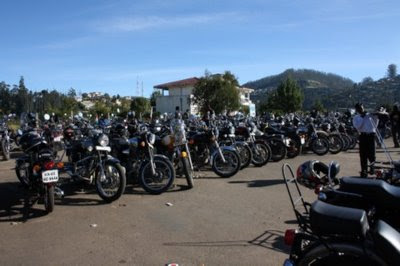 There are some great pics at my Flickr Page.

Kinda tired, we crashed out for a while and then I got up to take some great pics of the bikes assembled at the parking area. Damn, that must be a bike lovers and especially a Royal Enfield lovers paradise! I did see some great modified bikes too. Some built for comfort and some for cosmetic beauty - they were all awesome. None bad, none at all! I can go on in this vein.

The night ended with me taking some good pics and having a few drinks with some new friends and the rest of the gang. Fun filled day.

The next day, we had a rally of all the bikes (more than 400 of them) around Ooty town. Me, Sushil and Bluetooth along with a number of other volunteers including Balls manned the roads and helped in managing traffic when the Enfields roared in Ooty. 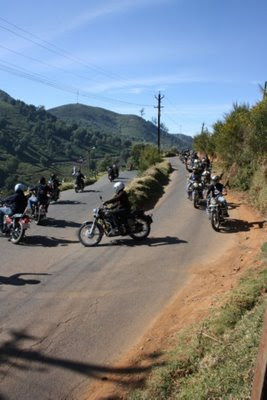 Bloody hell, everyone was curious as to what these bikes were doing in Ooty and I am sure the sleepy town was irritated a little with all that thumping! Every local and tourist wanted to know more.

More events filled the day - with some really insane games and competitions. Balls decided to have a tattoo done. (Let me know how it went at home dude!). 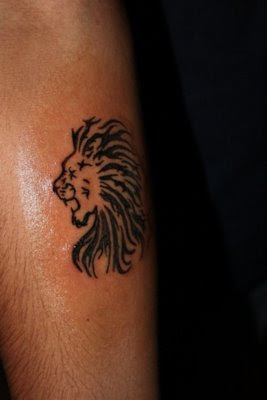 There was a nice event sponsored by Lee where the motographers could upload their pics and have a chance to win a $40,000 prize. But even better was that we all got Rs.1000 worth of Lee vouchers for uploading our pictures. It was at this time that we met Blackjack - a really fucking cool dude. Swapped some stories with the man and even got a great pic of an axe hammer sticking out of his back pocket! (Sent the pics dude!) 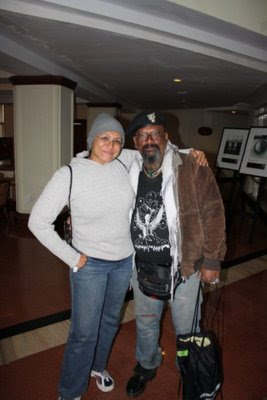 The rest of the evening was kind of a quiet one with riding back to Ooty town looking for some local food (Dosai and Sambar - yumm!) and quintessential Ooty chocolates. Bought some and made the way back to the resort with the idea of having a good drinking session at our room with the gang. Ended up not drinking too much as we planned to start off early in the morning the next day - at 9!.

Good start to the next day - we were already out of Ooty by 9 AM. Damn, that must have been a trick of some magician somewhere. Only problem was that Maxi's bike was starting to act up a bit and the front shocks had taken quite a beating so he could only ride slowly. Anyway, it was all in all a good ride and though Zeshan's bike gave us a scare on the way back, we made it to Mysore in quite good time. 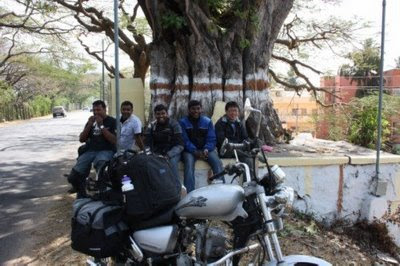 Another problem was that I should have been in office at 1:30 in the afternoon. Somehow got some permission to make it after that. Arun by this time wanted to leave and zoomed off back to Bangalore. Thanks Bluetooth for the fast ride back to Bangalore!

Reached Bangalore and made it to office - dead as a zombie and very tired.

And for all of you interested - I have some great pics of the ride put up at my Flickr page.
Conjured up by Naveen Roy at 2:52 PM