Whats the world coming to?

Hilarious!!! Came across this article from BoingBoing. Looks like Sanal Edamaruku, the president of Rationalist International has made an Indian tantric look like the effing fool that he is!!

Hats off to people like this!
Conjured up by Naveen Roy at 7:02 PM 2 comments: Links to this post

“If you are doing all that you can to the fullest of your ability
as well as you can, there is nothing else that is asked of a soul.”
—Gary Zukav
Conjured up by Naveen Roy at 8:39 AM No comments: Links to this post

I've been given this award by Anwin. Not able to put it in the left frame.

Awarded by
Anwin
to Naveen Roy

Conjured up by Naveen Roy at 8:13 AM No comments: Links to this post

Some of the best lines that I have read in a long time. These are off Walden by Henry David Thoreau.
"Say what you have to say, not what you ought." He criticizes conformity: "If a man does not keep pace with his companions, perhaps it is because he hears a different drummer. Let him step to the music which he hears, however measured or far away. By doing these things, men may find happiness and self-fulfillment."
Conjured up by Naveen Roy at 11:27 AM 1 comment: Links to this post

Nothing and I say nothing can be more fun!
Conjured up by Naveen Roy at 4:27 AM 1 comment: Links to this post

Email ThisBlogThis!Share to TwitterShare to FacebookShare to Pinterest
Labels: Riding

My favourite uncle passed away recently. I had come to office on the bike of all days since I was attending a seperate ITIL session on my off day. But it turned out to be a good thing cause I could borrow some money from a friend in office and take the bike directly to Majestic. I knew that I would not get a ticket on any of the private buses so I decided to leave the bike in Majestic and take the SETC transport to Nagercoil. I reached there at around 4:30 and very apprehensively, parked my bike without even the headlock on amongst a gaggle of lesser vehicles. They all looked dusty and old, like bikes parked at the local police station. Seeing my apprehension, the guy assured me that the bike would be fine and that I can even leave my helmet there for a Rs.20 fee. Seeing that I had no other choice, I took up the offer and paid Rs.20 for the bike too. He asked when I would be back and I said on the second morning. I guess he has seen a lot of people like that and said nothing.

Getting a seat in a good bus was another problem. The State Transport buses are pathetic and we all take them only as a last resort, as I have blogged before. But this was a last resort and there was only one more bus leaving for Nagercoil that day. I quickly purchased the ticket and got into the bus and had a hell of a journey. Even the bus conductor jokingly told me that if I am going on an emergency, to take a flight!. I started the journey at 5:00 in the evening and reached at 11:00 in the morning the next day!!!. An 18 hour journey (complete with dirty toilets, puking babies and loud, boring movies) that should have taken 14 hours, even with the bad roads. I reached half dead and had to go to my uncles house at once.

Damn, I really loved the man. He retired from a very high post in the Railways and was a very meek and humble man. Known for his interest in flowers like Orchids and Anthuriums, he was also very vocal in the support of my grandfather, Sam Nathaniel who was ostracized in the church and society. He made sure that whenever he could, he could convince someone about the part that my grandad really played for Kanyakumari District and to make right the ills that were played upon some of the pensioners in the district. My earliest memories of him were in my maternal grandmother's house, where all the cousins would meet during the Christmas holidays. He was the only one who owned a car in my mother's side and would drive it all the way from Cochin. I remember seeing him slyly having a cigarette or two at the backyard. I even remember getting properly thrashed by my aunt for "smoking" one of his discarded cigarette butts. But most of all, he was known as "Chocolate Mama" cause he would take me round to Topps Bakery and buy me a whole tin of those Chocolate Eclairs that were so costly those days. Every time he came to Nagercoil or wherever we were, I was sure of getting one of those tins. I believe my sister still has some of them lying somewhere. He always was interested in my life. What I was studying, how well I was doing, what work I was doing etc were questions that I always got from him. He would always advise me to travel by train and even lookup some of the trains to my destination. Even now, if someone mentioned Bannerghatta National Park, I remember him always asking me if I have been there. Whenever I was in Nagercoil, I can always expect a call on the first day asking how I was doing. Man, I'll miss those calls.

He was an uncle I really looked up to. Especially after the fact that he always stood for what he believed in. Following my grandfathers footsteps, he was a man known for his uprightness and straight forwardness. He was also known as a person who never accepted a bribe or offered one. I still can see him standing and arguing with an electricity man over some work order. During the burial ceremony only did I know how much he loved my grandad and wanted him to get recognition for all he has done for KK district.

The ceremony was a quiet one and well attended. Was kinda sad to see him go away at not so old an age. But he lived a good life and did all he could to help anyone in need. I will really miss the man and visiting that house is not going to be the same.
RIP!
Conjured up by Naveen Roy at 1:36 AM No comments: Links to this post

Cool, my fav pic has crossed 3000 views on Flickr! 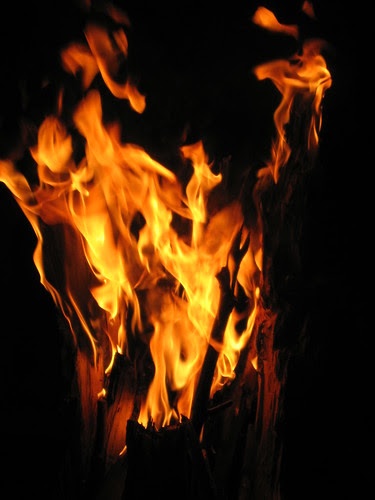 Yesterday's The Hindu had an interesting interview with Asko Parpola, who is an eminent Indologist. In this article, he explains why he thinks that ‘I do not believe in a full decipherment’ of the Indus script. Of something that has been of debate very recently after a certain political party came into power, he has this to say - "I have always found it most unfortunate that the past is politicised and used for other than scholarly purposes. As far as the Aryan-Dravidian dichotomy is concerned, it must be remembered that ‘Aryan’ and ‘Dravidian’ are linguistic and not racial terms". This is actually a very interesting line to take. Instead of lambasting the people who used the Aryan Invasion fact/theory for political mileage, he answers - "There is no pure race, and Aryan and Dravidian speakers have been in contact with each other in South Asia from the start of their encounter. Ever since the Aryan speakers came to India from Central Asia, this militarily powerful minority group would have mixed with the local population. Centuries of gradually increasing bilingualism eventually led to a large-scale language shift, making almost the whole population of North India Indo-Aryan speakers. Linguistic and religious fanatics inflame a wrong sort of nationalism, which has led to great ills both in South Asia and elsewhere. Ancient traditions of language must not be used to divide people."

For the complete article, read here.
Conjured up by Naveen Roy at 1:06 AM 1 comment: Links to this post